Xbox Game Pass gets its second round of October releases following seven additions during the first half of the month. As we head into Halloween, players can enjoy a sequel to a strategy mainstay, an inventive take on the first-person shooter, a narrative masterpiece, and more.

Today, Into the Pit launches which sprinkles spellcasting on Doom-style FPS combat with a roguelike structure. Outriders makes it way to PC Game Pass for desktop players itching for another quality co-op shooter. The arrival of Dragon Ball FighterZ gives fighting and anime diehards access to arguably the best tag team fighter of the last generation.  Coming-of-age voxel RPG Echo Generation brings a more lighthearted supernatural adventure perfect for the spooky season. Everspace 2 soars into Xbox Game Preview after charting a 2023 launch window. The Elder Scrolls-inspired The Forgotten City, one of the best narrative adventure games of 2021, brings its time-looping adventure to Xbox players. For strategy fans, the long-awaited Age of Empires IV launches day one on PC Game Pass at the end of the month.

Those would be the treats, but the tricks are what’s leaving Game Pass come Halloween. Read on for the full rundown of what’s coming, what’s going, and when. 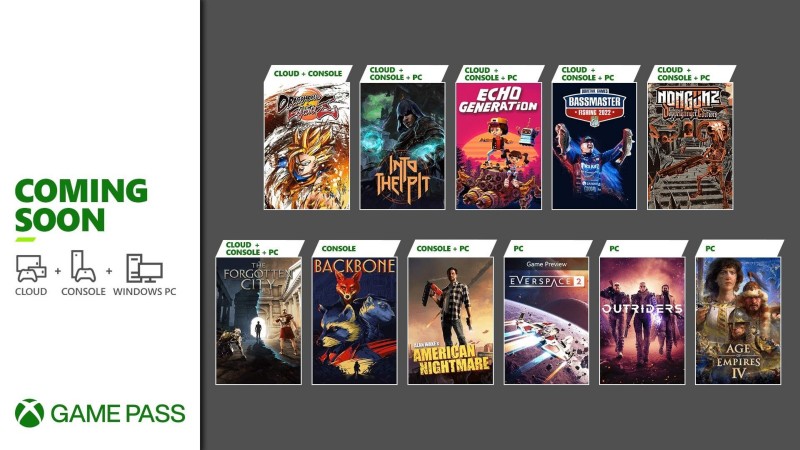 What do you think of this month’s Game Pass offerings? Let us know in the comments!