Battlefield has always been the largest, loudest, and most chaotic multiplayer experience in the business. It’s the Texas of video games, and whether you love it or hate it, its bombast cannot be overstated. For better and worse, Battlefield 2042 continues this trend, offering a dizzying amount of on-screen explosions, firefights, and objectives to capture. The game’s 128-player matches and gargantuan maps guarantee dramatic moments – and some of my favorite gaming clips from 2021 – but there’s a thin line separating spectacle and confusion.

There’s never been a Battlefield game released without Conquest, the signature mode which tasks two opposing teams to capture and defend objective zones across the map. The popular match format is alive and well, but honestly, it’s my least favorite way to play Battlefield 2042. Without the presence of a Commander (an organizational role from past entries), Conquest’s massive battles often feel disorganized compared to Breakthrough, a multiplayer mode replacing Rush from previous games. Breakthrough offers more focused engagements by separating the map into multiple segments, each containing two Control Points. If the attacking team can successfully capture all of the objectives in a zone, they can force the defending team to retreat to the next area. I love Breakthrough. 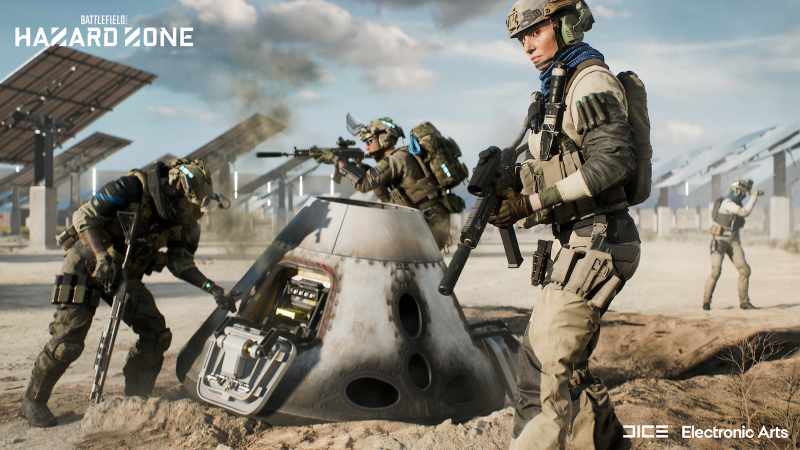 Hazard Zone, a brand new multiplayer format introduced in 2042, pits eight squads of four against one another and tasks them with retrieving data drives located in satellite crash sites scattered across the map. Each location is guarded by opposing AI forces that will attack your team on sight. Hazard Zone has no respawning unless your teammates have a Redeploy Uplink. Otherwise, you’re out of luck. The only way to win one of these matches is to extract via a highly-contested Helicarrier, which only visits the map twice throughout the game. If you miss the flight or die before making it on board, it’s game over. On more than one occasion, our team barreled towards the extraction location in a white-knuckle attempt to extract our precious data drives and subsequently score a ton of Dark Market Credits. You use this meta currency to purchase weapons and secondary gear before every match, so not earning a return on your investment can be heartbreaking. Admittedly, I was skeptical of Hazard Zone, but it’s been the highlight of my experience playing Battlefield 2042 thus far.

Whether you’re using a grappling hook to swing above the competition like Spider-Man, flying through a deadly tornado with a wingsuit, or sniping from the backline with the rest of your squad behind mobile barricades, each Specialist has an entertaining role to play. You can fine-tune each of these operators to your preference, and you can even swap weapon attachments mid-fight without having to respawn. Battlefield 2042 features myriad customization options, resulting in an immensely varied first-person shooter. While playing as Dozer, a burly character equipped with a full-body shield, I found myself standing face to face with the pilot of an armored tank. The vessel’s canon slowly panned over to face me, resulting in a hilarious moment of silence before he inevitably fired his shot. But to both of our surprise, my shield prevented the explosion from killing me. Mere seconds later, a friendly tank fired a shell from off-screen that blew up the enemy tank, providing a distraction long enough for me to score a triple kill by shield-bashing each member of the vehicle crew. This funny exchange is one of my favorite gaming moments of the year, however, the only reason I had my shield equipped was because of a nasty bug preventing me from aiming down the sights of any of my weapons.

Unfortunately, Battlefield 2042 currently lacks a layer of polish in its pre-launch state. Don’t worry; there’s nothing as serious as Battlefield 4’s launch woes. Most bugs I’ve encountered are minimal, like the grappling hook’s zipline clipping through the front of the device during its animation or struggling to call in air support on an arid map like Hourglass because of a bug with the sand’s navmesh. Others can have a detrimental effect on gameplay, like sniper scopes losing their magnification after interacting with secondary gadgets or not being able to revive downed teammates in Hazard Zone.

While I’ve spent the last three days playing Battlefield 2042 at a virtual review event, I still need more time with the game on post-release servers before offering my final verdict. Additionally, I’d like to dive deeper into Portal, the game’s community-driven platform that promises unforgettable battles that highlight features from Battlefield games past and present. Given the breadth of exciting content to play, including Portal’s six classic maps like Battlefield 3’s Caspian Border and 1942’s Battle of the Bulge, this entry is an easy recommendation for fans of the series. If you’re on the fence about purchasing Battlefield 2042 at launch, you can look forward to my full review in the coming days.