As a series, Forza Horizon has been on a roll for some time. After visiting Australia in the third installment and touring Great Britain in the fourth, we’ve known for some time that the newest and fifth entry in the long-running racer would transport us to the idyllic environs of Mexico. But it wasn’t until we got the final game in our hands that it became clear; Playground Games has gone above and beyond, crafting one of the best looking new-gen games on the market, and filling it with some of the most entertaining racing experiences in memory.

A good opener can go a long way to setting a game’s tone, and Forza Horizon 5 nails the landing – both figuratively and literally. In a rollicking opening sequence, one vehicle after another goes parachuting out from a cargo plane, dropping into various locales across Mexico. In just a few short minutes, the game makes a case for its tremendous potential, showing off everything from muddy offroad races through rivers and jungles, to blazing street races in supercars most of us will never drive in real life.

From there, it’s a non-stop thrill ride of engagement and opportunities for progression. A new race or other event is available at virtually every corner of a sprawling map. New major showcases with story wrapping open up gradually, but let you as the player choose where you want to go next, maintaining the sense of freedom and choice that characterizes most of the game. Smart UI and spoken dialogue guide you to content you want, but without being overwhelming or annoying.

As you drive, the production values, graphics, and sound all combine into a feast for the senses. A varied and fun soundtrack accompanies the roar of your engine, and smart sound mixing translates the music up into the loudspeakers of the festival locations as you come close to the center of the action. Slick water effects, incredibly detailed environments, and a powerful sense of speed are just some of the visual successes the game manages. And in a game this big, it’s essential players can navigate menus and other in-game elements with ease; thankfully, the myriad systems for car customization, event navigation, rewards, and everything else are all easy to find and understand.

While the window dressing is all stunning, it’s the actual racing that earns Forza Horizon 5 our highest praise. Across a wide variety of car classes and styles of racing, the game mixes arcade sensibilities with just enough realism and authentic physics to be thrilling and believable in the most bombastic way. Courses are thoughtfully designed, demanding you learn how to take a corner just as well as you handle a straightaway. Individual vehicles manage to carry their own personality and driving feel, and as a player, you begin to learn what you do and don’t like in a ride.

Taken together, Forza Horizon 5 is one of those games that simply screams fun. Easy to pick up and hard to put down, it’s a continuing success story from the team at Playground Games, proving that they are a group of developers with the ability to find both breadth and depth in the games they create. | Our Review 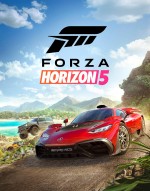