When Knockout City was first announced earlier this year, I confused it with Rocket Arena, the other stylized 3-versus-3 third-person multiplayer game published by Electronic Arts in 2020. However, unlike the latter, Knockout City was highly praised by fans and critics alike when released earlier this year. And while it’s a rather unconventional pick for Game Informer’s Best Sports award, Velan Studios’ eccentric dodgeball game is an easy standout in a year when most sports franchises are coasting by.

The game’s maps exist in a retro-futuristic metropolis full of flying cars, neon signage, and 1960s-inspired accouterments, making for distinct arenas to compete in. Each area is home to powerful weapons like the Moon Ball, which affects the user with low gravity, or the Cage Ball, which immobilizes the unlucky player hit with the projectile for easy elimination. As cool as those balls are, my favorite is the Sniper Ball, a laser-equipped football capable of high-speed skill shots.

Knockout City’s gameplay is equally compelling. Each player has a suite of techniques that are rewarding to master, including curved directional throws, tricky fake-outs, charged shots, lobs, dodges, and more. At any time, you can pass the ball to a teammate to quickly increase the throwing speed of the projectile or roll up into a human ball to have your teammate throw you with a powerful AOE attack. However, you have to be careful with the second strategy since an enemy player can easily pick you up and throw you off the map.

Knockout City blends the approachability of traditional sports games with the high skill-ceilings of fighting games, and the results are excellent. With a vast suite of uniquely-stylized cosmetics to grind for, you will spend hours playing this inventive sports title with friends. | Our Review 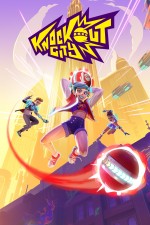