Shot – This basic spell, like the rest of the attack magic in this list, is mapped to the right trigger and doesn’t require a cooldown. However, it deals minimal damage to compensate. The small bullet-like blasts are akin to throwing rocks at enemies than more war-ready projectiles.

Burst Shot – The first version of this spell we saw indicated it was at level 3, which clued us in to the fact that you can upgrade various magic attacks. Burst Shot manifests a glowing chunk of rock in your hand, which you can hurl at enemies.

Slice – Among the most visually exciting spells we saw in Forspoken, Slice conjures a magical sword dripping with fiery sparks. The shimmering red magic flies through the air as you swing the weapon.

Arc Slice – Call up that fire sword once more to execute a powerful downswing blow, dropping the unlucky target of your fury to the ground. It hits harder if you’re in midair, but the range is limited if your feet are off the ground.

Blast Slice – Requiring a little more range than its counterparts, Blast Slice generates a weapon that looks like a cross between a spear and a lightning bolt. You can throw these at hostile creatures, and it will also affect the surrounding area. 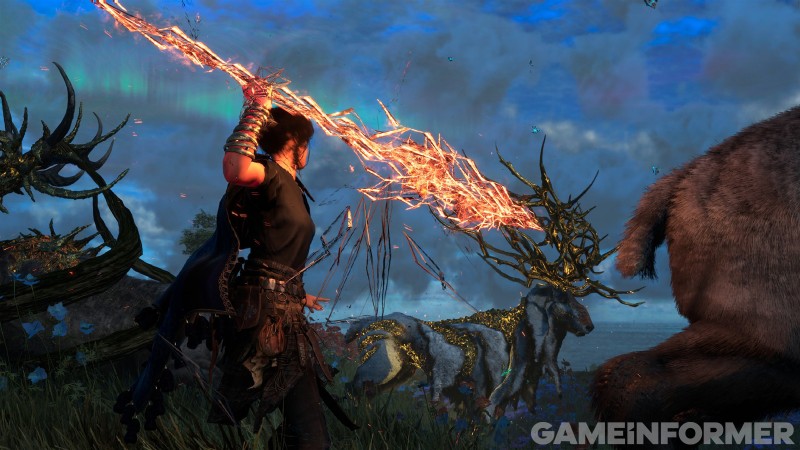 Bolt – Lob a blue orb at enemies that looks a little bit like a glimmering snowball. It won’t cause much harm, but you can chuck the wintery ball of magic repeatedly without running out.

Fan Bolt – Another upgradable spell, Fan Bolt takes the blue orb from the former spell and splits it into multiple, arrow-like projectiles. These will shoot out in a horizontal row, making it good for taking out multiple enemies.

Cluster Bolt – One of creative producer Raio Mitsuno’s favorite attacks, this spell fires a single mystical arrow into the sky. On its descent, the shaft breaks apart, showering anything underneath it with damage-dealing shards.

Dart – This magical attack works very much like Shot. Greenish knife-like bursts spring instantaneously from your hand at a target. You seem to have an endless supply, but they’re not very powerful.

Pulse Dart – Before sending another blast of green at your enemies, this spell – which can be leveled up – lets you charge the attack in your hand for a second. The result is a noticeably more powerful barrage of darts.