End Global 7, a coop company composed of prominent development studios, released a Q3 2021 Investor Presentation that detailed revenue/financial gains and a project pipeline for future IPs. The information packet revealed Dimensional Ink Studios, the team behind DC Universe Online, is working on another MMO. However, this time, players will be suiting up as created Marvel superheroes and (potentially) supervillains. The new Marvel MMO is currently in development, but the unexpected announcement is exciting nonetheless. 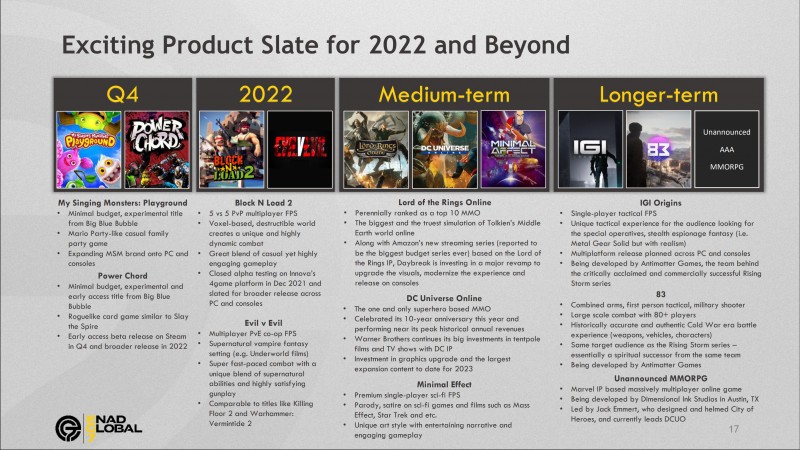 According to the slide entitled “Exciting Product Slate for 2022 and Beyond,” Dimensional Ink Studios is coming off a solid year with DCUO cornering the market for successful superhero-based MMOs. The studios’ most popular title is celebrating its 10th anniversary and “performing near its peak historical annual revenues.” Under the “medium-term” banner (seen above), a graphics overhaul and massive content expansion are in the works and slated for a 2023 release.

However, under the “longer-term” banner, an unannounced MMORPG is underway. The important bullet points read as follows:

It’ll probably be a long time before we get any notable info about this new Marvel MMORPG. Still, based on Dimensional Ink Studio’s pedigree, we can expect to see fun customization options, beloved heroes and villains to interact with, and exciting leveling systems with raid scenarios.

In other news, a bunch of  games featuring beloved Marvel and DC characters are around the bend. Be sure to check out Marcus Stewarts’ Wolverine, Suicide Squad, And The League Of Upcoming Superhero Games piece to learn more.

Do you play DC Universe Online? What’s your wishlist for the Marvel IP? Drop your thoughts in the comments below!