Double Fine Productions, the developer behind the Psychonauts series, Broken Age, and many more, recently celebrated its 20th anniversary. To celebrate this milestone, Double Fine partnered with Indie By Design to release a comprehensive art book that details the visual history of every single game the developer has released over the years – including insights from developers, in-depth interviews, and never-before-seen concept art.

Read down below for an exclusive excerpt from the book, titled 20 Double Fine Years, giving a brief look at the design decisions behind Psychonauts 2’s Aquato family and the game’s many, many brains. We’ve also collected a handful of pages so you can see how the entire book is laid out.

If you’d like to check out 20 Double Fine Years for yourself, it is available in a standard and collector’s Legend Edition right here. Alongside peeks behind the curtain of every Double Fine game, the book also covers 2 Player Productions’ Double Fine Adventure documentary series, webcomics the studio used to publish on its website, its Day of the Devs events, and much more.

Lastly, for more on Double Fine, make sure to check out our History of Double Fine Productions story we ran back in July to read how the entire studio came together. 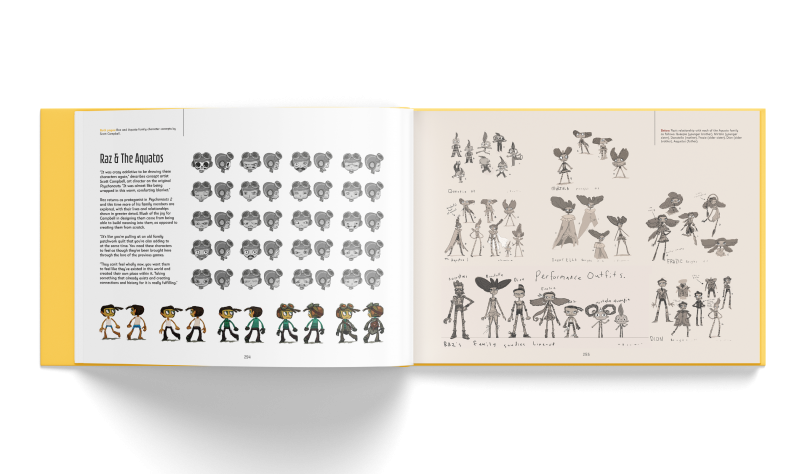 “It was crazy addictive to be drawing these characters again,” describes concept artist Scott Campbell, art director on the original Psychonauts. “It was almost like being wrapped in this warm, comforting blanket.”

Raz returns as protagonist in Psychonauts 2 and this time more of his family members are explored, with their lives and relationships shown in greater detail. Much of the joy for Campbell in designing them came from being able to build meaning into them, as opposed to creating them from scratch.

“It’s like you’re pulling at an old family patchwork quilt that you’re also adding to at the same time. You need these characters to feel as though they’ve been brought here through the lore of the previous games.

“They can’t feel wholly new, you want them to feel like they’ve existed in this world and created their own place within it. Taking something that already exists and creating connections and history for it is really fulfilling.”

Psychonauts 2 takes us through an incredibly diverse set of brains, each one presented as a fully-formed level for the player to explore. These levels are connected in the sense that you’re always seeing them through the eyes of Raz and that each represents a character’s innermost thoughts, but visually they are strikingly distinct.

“We looked back to Psychonauts to figure out what it was that made those different environments feel cohesive even though you’re jumping through all of these different brains,” explains environment artist Levi Ryken.

“One of the biggest things is proportions. We have this thing that we call the ‘Psychonauts wonk,’ which is basically that you can include stuff that seems pretty normal and consistent but you can’t present it normally. It has to have the ‘wonk’ to it.”

Parallel lines, for instance, are avoided for the most part. Characters are allowed to have two eyes that are essentially the same, but they’re typically presented as one being bigger than the other or one being higher or lower on the face.

“It makes the whole world feel a little off at all times,” Ryken continues. “It’s almost as though it was drawn by someone who holds a pencil really haphazardly and is dropping it all of the time.”