Thanksgiving sucks. It’s the one time of year you see all those family members you spend the other 364 days of the year avoiding. You know, the cousin that’s way into NFTs and meme stocks. The uncle who listens to the Joe Rogan Experience and somehow finds a way to reference it at every drop of the hat. It’s all just exhausting.

And that doesn’t even get at how bad turkey is. Turkey is like the Bunny Bread of meats. Dry, flavorless, and gross. Thanksgiving is a problematic holiday for many reasons, but I think turkey is the cherry on top of this crap sundae. How have we made such a bland, ugly bird the centerpiece of this entire annual tradition? Don’t get me started on those weird things under turkeys’ chins. I find it unfathomable that people eat these creatures.

I tend to skip my family’s Thanksgiving. While that might make me a bad son, family member, and overall person, it makes me healthier mentally. I just cannot bring myself to deal with the awkward conversations Thanksgiving forces out of people. No, AJ, I do not want to hear your thoughts on the Bored Ape Yacht Club; it’s a bad investment. Mitch, I absolutely do not need to watch this clip of Joe Rogan interviewing Dave Chappelle on your iPhone 7. Literally, why does Jacob have a gun on him? In case the pumpkin pie tries something funny?

What does this have to do with video games? Not a lot. But since we’re off this week and need to fill the website with content, here are my picks for the five video game characters that would make Thanksgiving awkward. 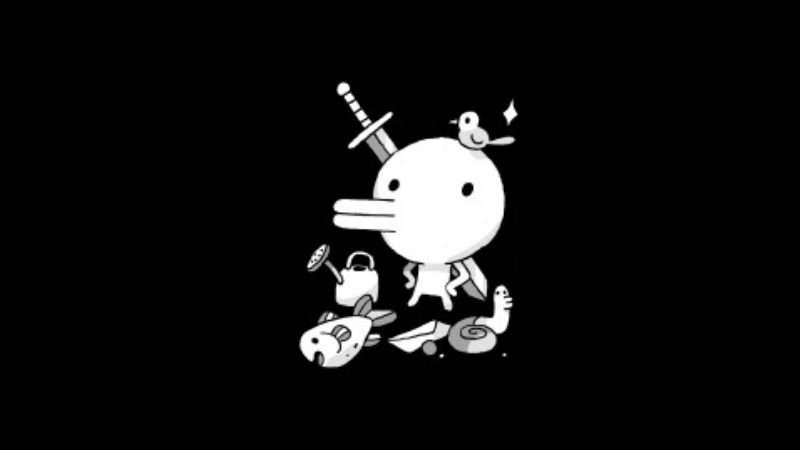 5: This little person from the game Minit (not sure if they have a name)

If there’s one thing you can say about Thanksgiving, it’s that it lasts way too long. But you gotta be there, attentive, and conversable to keep up appearances with your family. So could you imagine if every 60 seconds, one of you literally died and had to start the whole day over?

I don’t know much about Minit – I’ve never actually played the game – but thanks to its Wikipedia page, I know that you play the game one minute at a time. Once that minute is up, you die and start over.

This would be the most obnoxious way to celebrate Thanksgiving. Everyone is suffering through this whole ordeal together, but this lil guy, Mike Minit, as we’ll call him, keeps starting over every 60 seconds. He walks in, says hello to the family, shakes one or two hands, grabs a plate, eyes the stuffing, then dies. Moments later, he walks back in the door, repeating the whole process.

Sounds annoying. I couldn’t deal with it. 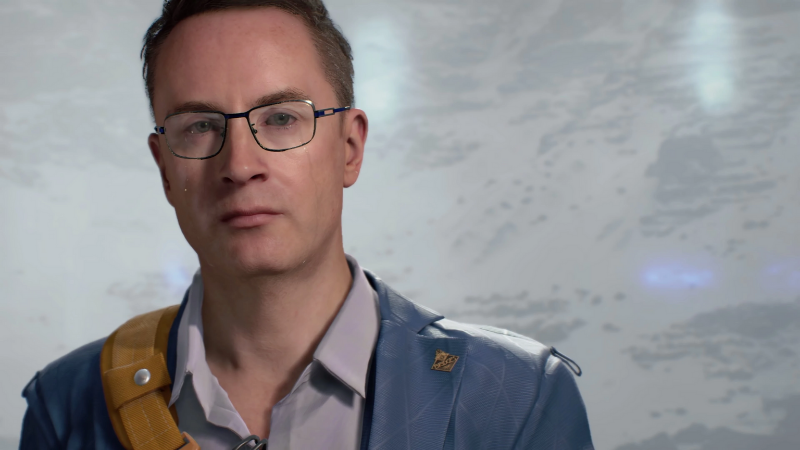 You know what, while we’re at it, this guy would be even worse than Mike! Every 21 minutes, Heartman’s heart stops, he dies, and he goes to the Beach to search for his wife and daughter before being revived three real-world minutes later. That’s not quite as bad as Mr. Minit – but Heartman spends 21 minutes on this mortal coil constantly pontificating and over-explaining the science of the natural world. My God, you can’t get a word in edgewise with this guy.

Here I am, trying to grab a second helping of dinner rolls, and this freaking guy is telling me about extinction entities. Shut the hell up! The only thing that will be extinct around here is my patience if you don’t leave me alone, Heartman. 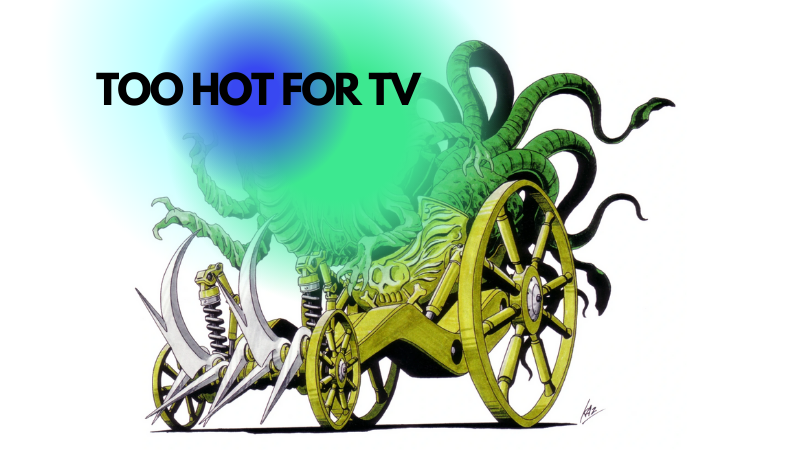 3: Mara from the Shin Megami Tensei and Persona series

You can just look at the picture; I don’t gotta write anything here.

… Actually, while we’re on the subject of the Persona and Shin Megami Tensei series, those games are chock-full of gross (and confusingly sexy) creatures you shouldn’t invite to your Thanksgiving get-togethers. I mean, look at this! 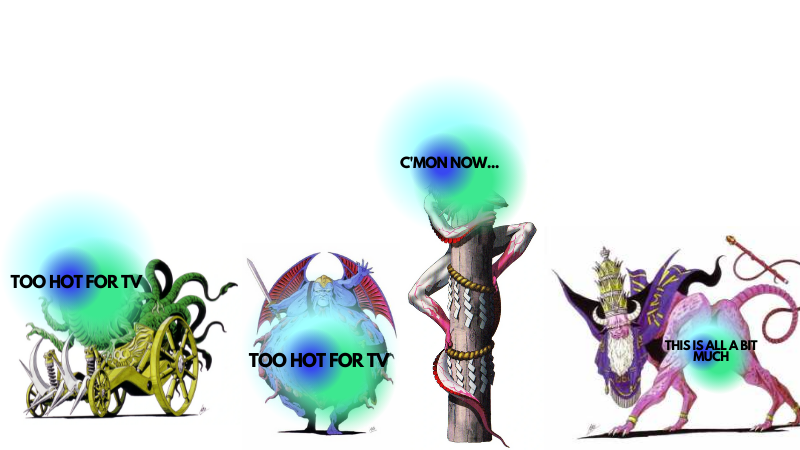 You know, for a series about high school kids, Persona and Shin Megami Tensei games are filled with creatures either closely resembling or outright brandishing their down-south features. Which, now that I think about it, it is somewhat appropriate given what’s on most high school kids’ minds.

Nevertheless, you can’t invite any of these folks to your family Thanksgiving! That’s a dang cancellable offense if I’ve ever seen one. How are you in good faith going to walk in with Arioch (second from the left) and ever look your grandma in the eyes again? They’re too sexy! You expect me to be able to eat mashed potatoes when Master Therion (far right) is across the table from me with all that going on? I don’t know about you, but I’d be too confused, distracted, and confusingly intrigued to get through dinner. At best, I’d need a moment to lie down and fan myself off.

Heck, if one of my family members brought any one of these creatures over to dinner, you best believe I’d be more than happy to talk to AJ, Mitch, and Jacob. Perhaps all three at the same time! 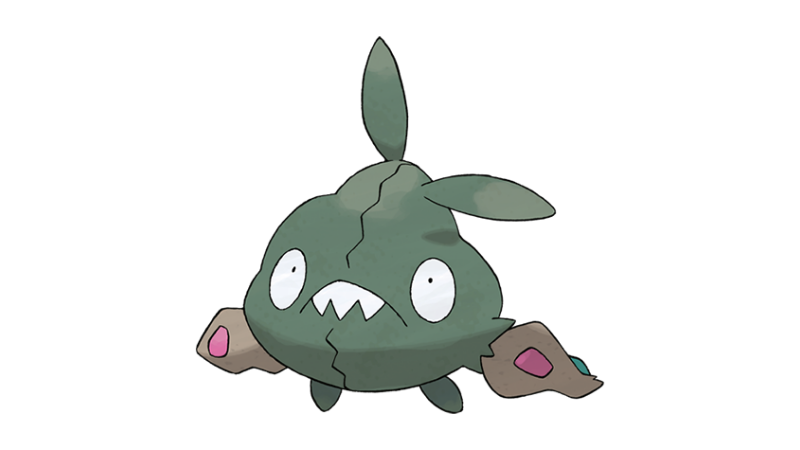 Hey, Pokémon fans, explain this one to me. Trubbish is literally just a trash bag with some googly eyes stickered on the front. The Pokémon Company is a multi-billion dollar company and this is what the brain geniuses over there are coming up with these days? That’s some rubbish if I’ve ever heard it.

Anywho, you can’t bring trash to your Thanksgiving get-together. Your aunt is already bringing her new boyfriend! 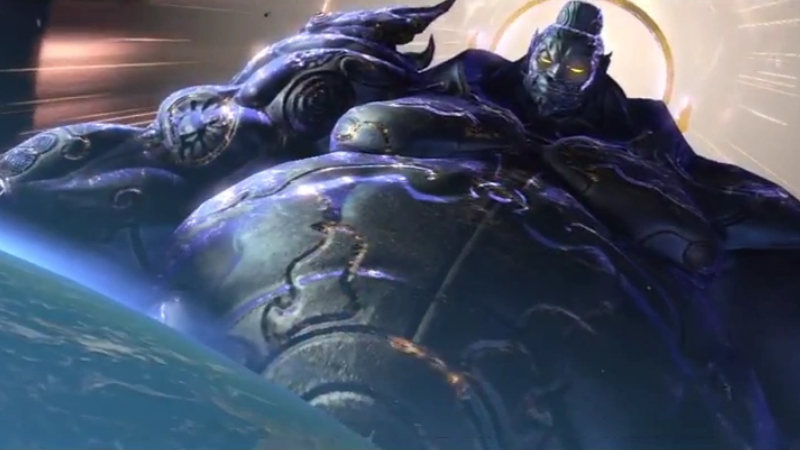 He’s too big! What’re you gonna do with this guy? Even if you lived in the Boeing Everett Factory – which CNET tells me is the biggest building on Earth, based on volume (3.5 billion gallons) – you still couldn’t fit this guy in your house.

Even if you could accommodate Wyzen’s size, how could you possibly feed him? He could eat all the Thanksgiving food prepared in all the homes that participate, and his stomach probably wouldn’t even register the difference. It’d be like you offering a normal human six dust mites and calling it a meal.

If Wyzen shows up to your Thanksgiving, you know you’re in for an awkward evening. Unseatable and unfeedable, you’d better leave him off your invite list.

Wow, so there ya have it, folks. Was our list correct? Let us know what you think! What video game characters do you think would make for an awkward Thanksgiving? Make your voice heard in the comments. Please, I’m begging you, engage with this story. Leave a comment. Any comment. The longer your comment, the better. Show a friend this article. Bring it up during Thanksgiving to your family members. Encourage everyone you know to sound off in the comments below! Please! PLEASE!