UPDATE 12/16/21 6:05 p.m. Central: GSC Game World has put out a new statement regarding its now previous intent to add NFTs to S.T.A.L.K.E.R. 2. The announcement, which you can see in the tweet below, reveals the removal of all NFT content from the upcoming shooter.

“We hear you,” the GSC statement reads. “Based on the feedback we received, we’ve made a decision to cancel anything NFT-related in S.T.A.L.K.E.R. 2.” The rest of the message says, “The interest of our fans and players are the top priority for the team. We’re making this game for you to enjoy – whatever the cost is. If you care, we care too.”

This wasn’t the first statement to be released by the developer today, however, with a very different message tweeted and deleted not long before. In the first statement, GSC doubled down on including what it called “NFT-bonuses” within S.T.A.L.K.E.R. 2. “We are eager to do NFT Right,” said the now-deleted message. The company wanted to allow players to “get into the game without interfering with other players’ experience.” We saved a copy of the previous statement, which you can read in the image below. 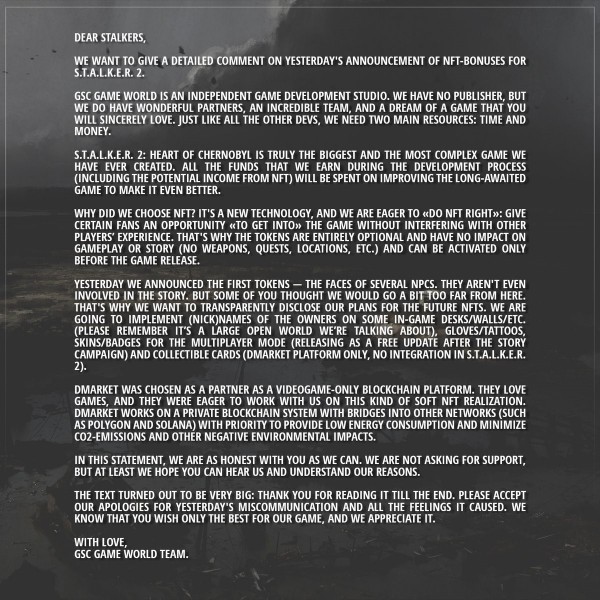 Once again, the image above was originally released on the S.T.A.L.K.E.R. Twitter account and deleted shortly after.

Whatever pressure from the S.T.A.L.K.E.R. and overall gaming community seems to have worked, and worked very quickly for the company to completely reverse course on the NFTs it was obviously insistent on keeping intact.

The NFT NPCs in question, and what they entailed can be read about in the original story right here:

Original Story: S.T.A.L.K.E.R. 2: Heart of Chernobyl developer, GSC Game World, has announced the creation of its S.T.A.L.K.E.R. Metaverse where players can inhabit the upcoming shooter as an in-game “metahuman” NFT in the form of an NPC.

We’ll give you a few seconds to wrap your head around that one…So basically, beginning this month, users can register for in-game item drops “that will evolve into a new gaming feature built on top of S.T.A.L.K.E.R 2” and the first drop will take place by way of an auction scheduled for January 2022, according to a press release. Whoever gets this first drop will become “the first-ever metahuman” that will be “released and exposed to hundreds of millions of gamers worldwide.” GSC Game World seemingly has very large expectations for its upcoming sequel. 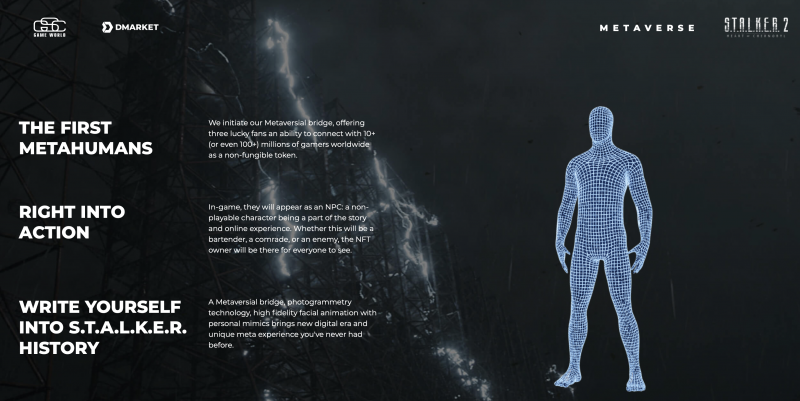 “In-game, the metahuman will appear as an ‘NPC’ or a non-playable character,” the press release reads. “The face of the real owner will be recreated in the game by using photogrammetry technology, resulting in the highest possible level of realism.” This NPC will live on the blockchain, like the other metaverse-related items soon to be dropped for the game, but GSC does not specify which one. GSC is, however, working with NFT trading platform DMarket in all of this.

Blockchain games and NFTs have drawn heavy criticism in the industry thus far due to their part in ongoing environmental damage. The use of cryptocurrencies, which are often used to purchase NFTs, and the mining of said currencies results in millions of carbon dioxide emissions, damaging Earth’s atmosphere, as reported by The Verge. At the moment, the use of cryptocurrencies is largely viewed as harmful to the planet. Ethereum, one of the most-used cryptocurrencies, though, is working on something it calls “The Merge,” which it says will “start the era of a more sustainable, eco-friendly Ethereum.” Only time will tell how green Ethereum becomes, though.

It’s unclear exactly why this NPC needs to reside on the blockchain, especially considering that video games have included real-world scans of people as NPCs in-game before. The same could be said for in-game items dropping in-game – NFT or not, if GSC wanted to, it could technically remove these drops from S.T.A.L.K.E.R 2 so the promise of living forever in-game by way of NFT and blockchain is really more of a promise from GSC.

The second drop will happen in February “with the highly secretive genesis packs,” according to the press release, and the next drop after that will be announced on Twitter and Discord. GSC says these drops “won’t influence the gameplay itself or give in-game advantages over other players.”

GSC joins a slew of other developers who have announced NFT and blockchain-related games or features such as Ubisoft, who recently revealed its Quartz NFT platform. Just last month, EA CEO Andrew Wilson said NFTs and blockchain games are the “future of our industry” before admitting that he’s unsure of how that’s going to work. Just last weekend, Gala Games announced a $100 million initiative to help fund blockchain games from the likes of Peter Molyneux, Will Wright, and others.

What do you make of all of this? Let us know in the comments below!